Aichi Prefecture is a large hub between the Chubu and Tokai regions, with Nagoya as the capital city. You might know Nagoya as one of the main shinkansen stations to change at, but it also has a rich history and one of the most distinct regional cuisines in all of Japan. There’s a number of large festivals throughout the year and a lot of man made structures that serve as tourism destinations.

Nagoya isn’t the most touristy of places, since most people think there’s not a lot to do, but there is a lot to eat! Only one hour from Osaka and two from Tokyo on the bullet train, there’s no reason not to have a stop over at Nagoya.

Nagoya meshi is the name for food specifically from Nagoya, with a focus on miso, udon, and eel. Miso, specifically red miso, is a local specialty and it’s considered to be one of the foods that gave stamina to the great samurai of the region. Throughout history, Nagoya was home to some of the most famous war lords and shogun in all of Japan.

Miso Nikomi Udon: Thick and chewy udon is cooked in earthern bowls in single portions, boiled in miso and served with vegetables, egg yolk, chicken, or any other hot pot style ingredient. It’s said that this style of cooking in single portions originated in the Taisho Period in Nagoya city. 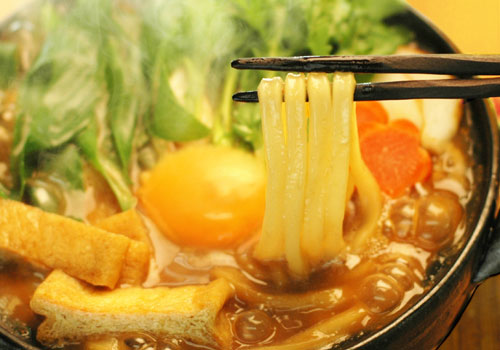 Miso Katsu: Pork katsu served with a miso sauce poured over the top. It’s usually a pretty intense sauce, but at the same time quite different from regular miso. Most restaurants that serve this dish have their own secret blend of condiments and spices in the miso sauce, so it’s always slightly different.

Miso Oden: A seafood stew made of fish cakes and vegetables cooked in a miso based soup.

Dote-ni: A post-war dish that encourages eating the whole animal. Pork or beef offal are boiled in miso broth and creates a rich salty-sweet flavour.

If you only eat one type of Nagoya Meshi, make it this! An extravagantly served box or bowl of rice topped with succulent eel, but eaten in a special way. Divide the potion into four, take the first quarter into a separate bowl you eat out of and eat it as it is. For the second quarter, add the condiments that come with the dish and enjoy a whole different flavour. Third, eat it ochazuke style by adding hot green tea. For the final quarter, pick your favourite and eat it all over again!

It really is like eating three completely different dishes and will amaze you when you see how much the flavour changes. This is one of the best dishes in all of Japan, in my opinion!

Oni Manju: “Devil cakes” in English, these manju are made from steamed rice with cubes of sweet potato which create devil ‘horns’. A simple flavour that is good as a snack to tide you over until your next meal without being a sugar hit.

Uiro: A cake-like dessert made from steamed rice flour and sugar. It comes in different colours and flavours and 90% of all production in Japan comes from Aichi Prefecture!

Ogura Toast: Maybe not quite a dessert, but basically a buttery toasted sandwich filled with a thick layer of anko red bean paste. Red bean on toast is a really easy and quick snack when you’re at home and too lazy to cook (coming from first hand experience…)

Originally created by a Taiwanese chef in Japan, you probably would never actually find this in Taiwan. This dish is a variation of Taiwan’s tantsumen dish and features chilli, garlic, extra spicy mince, and vegetables toppings over a chicken broth.