Right in the centre of Honshu island, Gifu Prefecture is landlocked and surround by seven other prefectures. Within Gifu Prefecture is a number of smaller regions, consisting of the loosely defined Seino, Gifu, Chuno, Tono, and Hida areas. The most famous region is Hida, known for including the popular tourist destination Takayama and the city of Gero which is in the top 3 best locations for onsen in all of Japan. The region is full of beautiful lush greenery, best displayed while on the train which snakes through forests and riverbanks of Hida River. To get to Gifu you can catch a local express train from Kyoto or get the local train to Nagoya station and then change to the Shinkansen to go to Tokyo.

Historically Gifu Prefecture was a very strategic location for battles fought when first uniting Japan as a country as it’s quite literally in the middle. These days, it’s known as a place with high quality artisans, especially in ceramics.

Hida beef is black haired cattle native to Japan that is raised in the Hida region with a minimum age of 14 months. It’s a real point of pride for locals and you’ll see it advertised everywhere you go. It also needs to be rade A or B to get the mark of Hida gyu so it is really high quality beef. The Hida gyu association says it’s best enjoyed as a steak, in sukiyaki, or yakiniku BBQ. Gifu Prefecture also has a distinct style of 1 person sukiyaki. Served in stone bowls atop a flame that heats the dish. Even when the flame comes in the form of a small candle it actually gets pretty hot and it’s quite impressive to be served one of these. The above dish was served with rice, miso soup, and pickles (from Takayama). The local food is almost always served the traditional way with side dishes and soup, this is a really good place to get a feel for the true essence of washoku. For 500 Yen you can grab a stick of Hide gyu from street stalls in Gero. We didn’t get to go to yakiniku here but this was pretty close! Even though in Australia 500 yen seems really cheap, this is quite expensive in Japan for just one stick (if you go to yakitori it can be as low as 100 yen per stick). Yakiniku is seasoned with just salt and pepper, so you really taste the meat for what it is.

There’s no oceans around, but this is Japan so there has to be seafood around somewhere! In Gifu City, one of the major attractions for tourism is cormorant fishing – where fishermen use birds to do the work for them. They specifically catch ayu or sweetfish.

They have a distinct fish and you can find them in Gifu City. The cormorant fishing is a tradition that is 1300 years old, and once was a main industry of Gifu but is now purely for tourism. You can buy tickets to ride a boat during the night time fishing displays and be served food as you watch.

This is a local chicken and vegetables dish, where the chicken is first marinated in things like ginger and soy then stir fried with lots of vegetables. It’s called a ‘stamina’ food because of the amount of vegetables and so restores your strength for the rest of the day. It might be sweeter than expected but is still a comfort food that is familiar in its flavours.

It’s so popular around Gifu Prefecture that the Japanese Embassy in London even published a recipe for it:

Doubanjiang to taste (this is a spicy Chinese garnish) 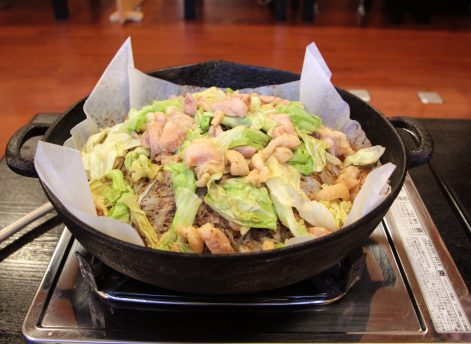