Spread over 1,000km and over 100 island, Okinawa Prefecture is known as one of Japan’s best holiday destinations thanks to it’s tropical climate and southern location. Considering Japan’s status as an ancient culture, Okinawa’s place in Japan’s history is relatively recent, becoming fully incorporated into Japan as a country in 1879. Previous to that, Okinawa had been the Ryukyu Kingdom. Karate originated in Okinawa, and it’s also known to be a place that has a distinct culture, language, and food in comparison to other places in Japan. It is truely unique.

Because the prefecture is made up of a number of islands, transport can be a bit tricky. Most larger islands have their own airport, and if you hire a car you can get it ferried from island to island and then use the highways to get around.

Let’s get to the food!

Also known as Ryukuan cuisine, Okinawan food is influenced by Japanese, Chinese, South East Asian and Western cooking styles, as throughout history it has been connected via trade routes to many parts of Asia and was occupied by America after WWII. Okinawans are world renowned for having the longest life expectancy, and many attribute it to their diet.

Unlike mainland Japan, Okinawan cuisine (despite being an island) doesn’t have much seafood, mainly because the water surrounding it doesn’t have that many types of fish and the higher temperatures make it difficult to preserve and keep fish fresh.

This is a stir fry where tofu is the central ingredient, accompanied by a variety of vegetables (often bitter melon, which is abundant in Okinawan cuisine) and sometimes meat. It’s interesting that in Okinawa Prefecture, meat is used to season vegetables rather than being the main part of the dish itself. It’s a unique diet and the small portions of meat is one of the things that contributes to the good health of locals. 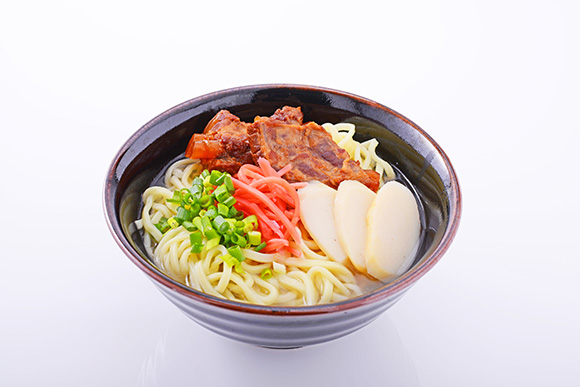 In mainland Japan, soba refers to buckwheat noodles, but in Okinawa (where the local pronunciation is suba) it’s regular wheat flour and egg noodles that are almost as thick as udon, and it’s served in a soup more similar to ramen than the type of soup you’d be served in Kyoto.

Fun fact: if you want the soba you’re familiar with in Okinawa, you have to call it ‘black’ soba or ‘Japanese’ soba (Nihon soba). With a whole bunch of varieties, it’s hard to actually say what rafute actually is. The one thing all variations have in common is that the main ingredient is pork rib cooked in soy sauce and brown sugar. Sometimes served over rice and sometimes served straight up, it’s a must try dish that’s succulent and juicy – just how pork rib should be!

Like we said earlier, Okinawa Prefecture is fairly “new” and open to a lot of different cultures. One of the most popular and well known dishes to come from Okinawa is taco rice – a tex Mex fusion dish that’s pretty similar to the taco you know, but with rice. This dish was created in 1984 and is served in a strange number of places, some chain restaurants added this to their menus (but only in Okinawa locations) including Yoshinoya, Taco Bell, and KFC.

‘Okinawan’ sweet potato, or beni-imo is purple in colour and sold as a street food, especially in winter and at festivals. It can be both sweet and savoury.

Native to Okinawa Prefecture, this is the local drink of choice! 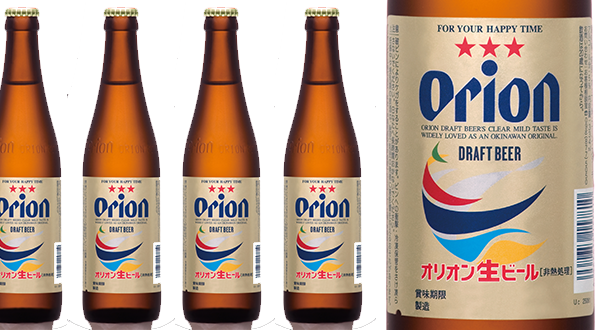 There’s lots of influences in Okinawan cuisine, and you can see it in the ingredients they use. Chinese influence is seen in the pig ears, American in the cans of Spam, and Japanese in the high consumption rates of kombu seaweed. It’s a mix of everything under the sun, and the result is a foodie wonderland. Mix that with tropical beaches and adventure on every island and you have yourself the perfect getaway… *cue dream sequence*